Canton, N.C. — Some people hit rock bottom and then there are overachievers like 27-year-old Saul Thomas Alford, 27, who on May 31, delved so far below rock bottom that he is starting to concern Courtney Love.
According to The Mountaineer newspaper, Alford overdosed while attending Haywood County District Court, not because he was on trial, but because he was there “to support a friend.”  Hopefully next time he’ll just send flowers and a greeting card. 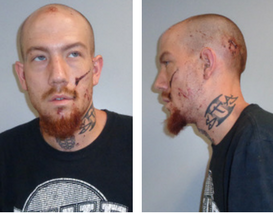 Saul Thomas Alford, pictured here at the exact moment that he finally questioned his life choices.

Sheriff’s deputies, the Waynesville Fire Department and Waynesville Police Department worked to revive Alford, but his drugs proved to be too dank and he had to be taken via ambulance to Haywood Regional Medical Center, where he was saved and in a just world, this story should have petered out, but alas, Alford wasn’t done demonstrating how boss he is at making good decisions.
Almost immediately after arriving at the hospital, Alford removed his I.V. and went on an unforgettable and magical adventure that we hope will one day be adapted into a children’s book.
At some point after leaving the hospital, Alford broke into the home of resident Naomi Hall, wrecked a desk owned by a Bianka Rich, and stole a Samsung tablet belonging to Reanna Gentry (these names all sound fake).
At some point, Alford found time to smash the windshield of Rich’s car with a 4-foot pipe, and one of the women involved decided to give Alford a brand new head shape, using a baseball bat. That might explain the facial injuries in the mugshot above, though it is equally possible that that is just how his face always looks.
Read more here.